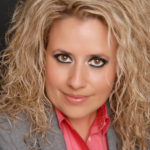 Pastor Ana Sweet was born in Mexico City and moved to Puerto Vallarta at the age of five years old.

She was raised by a single mother who gave her whole life to work day and night for the well being of her two daughters. Her mother taught her to love and respect an absent father and never allowed her to be judgmental. With her mother’s example, Pastor Ana grew up to become a strong woman convinced that a woman should never take a “no” for an answer in her journey to success.

At the age of seventeen years old, she had a personal encounter with Jesus Christ and her life changed completely. She was born again under Bishop Saul Gonzalez Vargas.

He became her spiritual father, her pastor, her mentor and the most important voice in her decision making. Jesus became her number one love of her life and His Word became her manual for life.

She has a degree in Business Administration. She worked in Four Seasons Resort Punta Mita for four years and then decided to leave everything to become a full time follower of Jesus.

She served Bishop Dennis Leonard as the Hispanic Pastor at Heritage Christian Center for seven years. She then started her own church Perdon Amistad Denver where she is the head Pastor now. Through the persistence of her number one encourager, her husband Arturo Alcalde, she became a writer for the most important spanish newspaper in Denver “El Hispano” and then became an author of eleven books.

She is a mother of three beautiful children: Joshua, David and Raquel.

Pastor Ana Sweet believes that dreams come true. The biggest recent event in her life is that Dr. Mike Murdock became her spiritual father and her number one investor. Her life has changed through his mentorship, his presence, his anointing, his trust, his books and the huge opportunities he has given to her. God called Bishop Saul Gonzalez to be with Him in Heaven on July 14 2011, God sent Dr. Mike Murdock to become her spiritual father on August 7, 2013. A new season has begun…